Cleantech under the spotlight in build-up to Paris talks

The dramatic and sustained drop in the global oil price led to a certain amount of doom mongering around the cleantech sector. The fear, of course, was that cheaper fossil fuels would make clean energy investments less competitive.

However, clean energy investment – as tracked by the Bloomberg New Energy Finance – has held up well. There may be a slight dip over the next few months if the economic confidence reading of cleantech businesses given by our International Business Report (IBR) continues to act as a good predictor of future growth (see chart). But the industry remains buoyant overall. 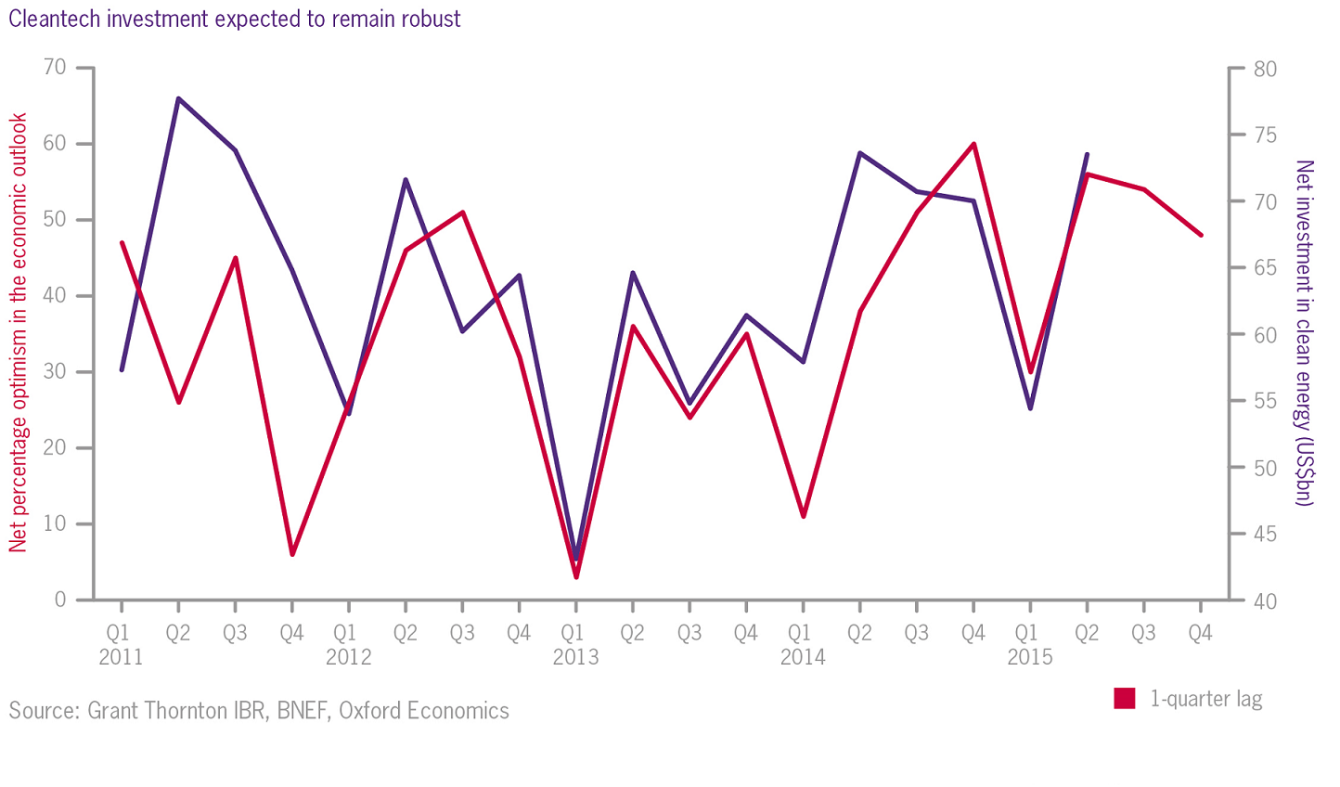 Reasons to be cheerful

Cleantech businesses have every right to be optimistic. With momentum building towards a global climate change deal in Paris, hard economics are slowly overtaking green sentiment as the main reason to push the renewable argument. The +50% fall in the price of oil is significant, but the cost of producing solar and wind energy has fallen by similar amounts as the technology matures.

Added to that, most renewable sources of power have very low running costs, particularly set against fossil fuels and nuclear. As the set-up or ‘sunk’ costs decline, renewables are only going to become more competitive.

The increase of micro-generation in emerging markets is another reason to be cheerful. As with now ubiquitous mobile phones, consumers and businesses in many emerging economies are skipping inefficient fixed installation lines and grids in favour of greater control. Around 300m people in India alone live without access to electricity.

Historically, providing people with power has meant more carbon. But the quickest way to improve access to energy is so called ‘distributed energy’ for which renewable sources are particularly appropriate – think solar panels on houses or a village wind turbine. We should also not forget positive externalities in the form of reduced fossil fuel imports and job creation.

A global climate deal in sight?

There is also increasing optimism that some sort of global emissions deal will be reached in December at the UN Climate Change Conference. The US and the EU have made the most significant pledges (quite right too, retort emerging nations, as developed peers are responsible for most of the carbon in the atmosphere today).

With that said, the vast majority of countries are doing something, whether clamping down on coal-fired power stations, putting a price on carbon emissions, cutting fossil fuel subsidies or conserving forests. What everyone is looking at though, is how to ramp up renewable activity which offers the potential of increasing living standards without damaging the environment. Germany – which today gets 28% of its electricity from renewables, up from 6% at the beginning of the century – is the shining example for many here.

Those working in cleantech should enjoy their moment in the limelight while remembering that the hard work – moving global economic growth onto a low carbon trajectory – has never been more crucial.